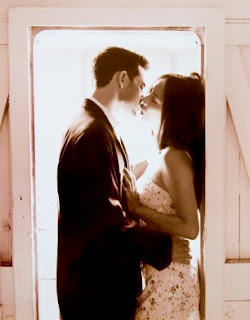 Believe me, you'll never know how euphoric I am to finish! There were times when I thought that wasn't going to happen and I was going to disappoint all my Echo Falls and Applegate fans, all of MY fans.

I sold The Sweetheart Dance to The Wild Rose Press in June of 2008. It was released in February of 2009. I started Kiss Me Goodnight after I came home from the Romance Writers of America National Convention in July of 2008. In fact, according to my log, I started it on Anne's birthday, my first daughter - August 19th, 2008. She was 23.

Coincidentally, I finished it last night on Jamie's birthday, my second daughter -May 8, 2010. She is 23.

I wrote from August 2008 to October 2008 and then had to put it in the drawer while I pondered the chaos caused by the dissolution of my twenty-three-year marriage. It sat there from October 2008 to October 2009. The marriage problems I had given to Bill and Helen, the Applegate parents, and what I wanted Tom to learn from that - well, it was too close to my personal life and I couldn't keep working on it. So I put it in the drawer, at first for just a few months I thought, to get some perspective.

A few months became a year.

A chance conversation with my writing partner, Kelly McCrady, changed the marriage problem part of the plot and off I went again to try to get this manuscript completed. Deadline after self-imposed deadline kept getting blown - except when I did work on it, the words that were flowing out of me were so compelling and fabulous I had to just be satisfied with that slow pace. I was unhappily satisfied, I might note, but couldn't wrap my brain around a tougher schedule.

Caring full-time for my grandson (born in 2007), divorce legal issues and the death of my mother nearly derailed me at every turn.

You will never know how hard I fought throwing in the towel and how much pep-talking I had to do for myself just to keep plodding along. I hated how long it was taking me. I know I am capable of writing faster. Yet as I sit here finally finished, I realize that one lesson I've learn as a writer is that it takes as long as it takes. Writing doesn't take the place of living my life and I had some serious stuff going on.

So today I'm celebrating. Book 3 - Kiss Me Goodnight and Book 4 Canyon Hearts, written with Kelly McCrady, can be polished now and go to The Wild Rose Press. I hope they love them.

I hope YOU love them.

Thanks for your patience.
Labels: update on writing

This is wonderful. You fought hard to get this book done, even with everything going crazy in your life. Job well done.

Aww, Marie. Thanks so much. That Job Well Done means alot to me.

Hooray! next step: polishing revision, a one-two punch on books 3 and 4. Look forward to helping :-)

Looking forward to revisions, too, Kell. What I also should have mentioned is that during that year dead zone for KMG, you and I started Canyon Hearts and it was a lifesaver. Kept me plodding forward because I didn't want to let you down and eventually the success of finishing that allowed me to go back and finish this.

For that I thank you!

Whee! Good for you, chicka!