I love Thursday nights . . . Project Runway is about the only show I tune into life-time and don't resort to catching up on DVR. I prefer the show after a few more people have been eliminated and the challenges are a bit tougher, but that doesn't stop me from tuning in from the very first minute to the very last second.

This week's challenge: Lisa Walker, Vice President for Innovation for the Campbell's Soup Company, joined Tim and Heidi to present the designers with their new challenge: create a signature dress for the Campbell's AdDRESS Your Heart program, a nationwide campaign to create awareness about the pervasiveness of heart disease in our nation. Red must be a prominent color in the dress, and the Campbell branding must be present. Campbell's has provided the designers with Campbell-branded textiles for each designer's consideration. The designers have the option of creating their own Campbell's branding by using supplemental fabric.

The designers worked with real clients this time around - women who had survived heart disease issues. They were an eclectic bunch of women in all different sizes and shapes. Red really isn't one of my favorite colors because it is so hard to wear and pull off well. It's too early to predict who will be going to the Finals, but I already have a few favorites. 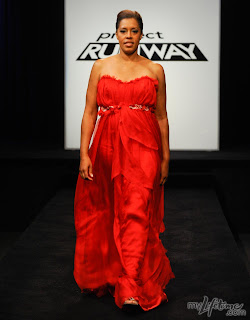 I understand why the judges picked Amy's dress. It's going into limited production for a sell to the masses to benefit heart disease. The dress was simple and flowed with the fabric, a tasteful dress that will have broad appeal. I just didn't like it. 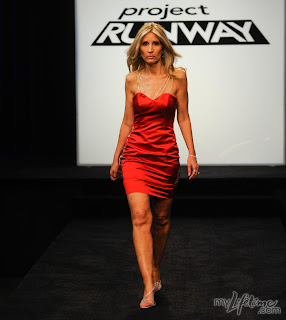 Jesus deserved to go home. He was in the bottom for the last two weeks. The biggest problem with his dress this time around was too many elements. If he'd stuck with the Campbell soup panels in the sides, made it a bit longer and not so damn tight, and dropped the faux diamond straps, he might have stayed another week. Regardless, he's young and still has alot to learn and this is a venue that doesn't reward not knowing what the hell you're doing. Bye, Jesus.

There wasn't one design that I really loved this week. Usually there is at least one, if not two, that I adore. Not this week. If I have to choose, my favorite dress this week: Jay's. 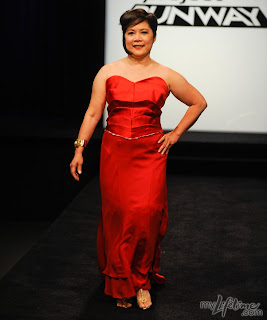 Understated elegance and enhanced his client's figure while staying true to what he knew he could do as a designer. Wasn't a big fan of the train on the back, but his client obviously loved it. 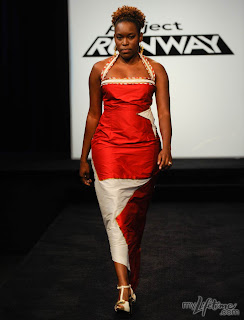 While I fully admit it did have a costume flavor to it with the star design, she took a concept from a glimmer to a viable design, it was well made, she stuck true to herself as a designer and her client loved it. Even with immunity, she rocked that challenge. I'd never wear it, and it didn't have broad enough appeal to be sold to the masses, but still it stuck to an ideal and pulled it off.

Jonathan - created a rich burgundy gown with panels that flowed and shimmered with each move. Unfortunately, the Campbells logo detracted from his great dress. 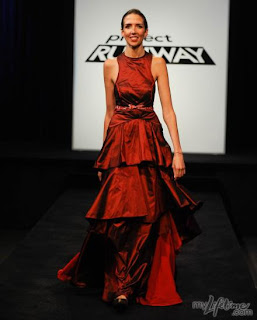 Kudos to Anna for being innovative and tracing the Campbell's logo on sheer fabric; Jeers to Anna for having a dress design that sucked and lost that unusual subtlety in the presentation. 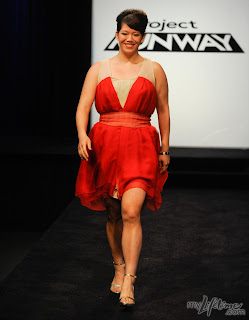 Worst design of the night: Janeane 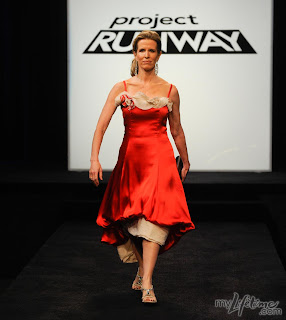 If Jesus hadn't delivered several consecutive poor performances with questionable taste, Janeane would be going home. This dress looked like it was made from a ragbag and did nothing for her model.

People I'm Watching: Seth Aaron and Jay - both are talented and in tune with who they are as designers. They both have yet to have a project that makes their talents shine, so the next few weeks should be interesting for both of them.
Labels: Project Runway