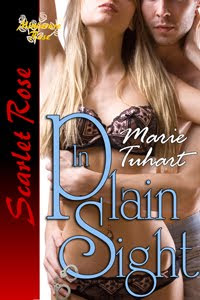 The Wild Rose Press has released my friend, Marie Tuhart's, Minature Rose e-book - In Plain Sight today! Run over and check it out! You won't be sorry you did!

Bad boy businessman Joe Bradshaw has achieved almost everything he’s wanted in life, but his strait-laced colleague Victoria Collins is proving an elusive challenge. A steamy encounter in the elevator begins a wild journey of sensual discovery. Joe’s determined to break through Vicki’s barriers to reveal the red-hot woman hiding inside. But Vicki is stalked by her past—her ex-fiancé will stop at nothing to get her back. Falling in love and keeping Vicki safe could be the biggest challenges of Joe’s life.

“You’re too dangerous.” The words slipped out before she was even aware of voicing them aloud.

His eyes widened, and another of those sexy, devilish grins spread across his face. “I’m not dangerous. I’m a teddy bear.”

Victoria gave a snort of laughter. He took another step toward her, and now her bedroom felt too small. He was invading her territory. “Grizzly bear is more like it,” she muttered.

“A man,” he said, taking two more steps. “A man who wants to get to know you better.”

“If we get to know each other any better, we’ll be arrested.” Her gaze locked with his. He stood less than a foot away from her.

“I got things a little backwards last night.”

“Backwards?” An odd word to use. She tilted her head to one side and stared.

“Yep, backwards.” He caressed her cheek. “Making love to you in the elevator was impulsive.”

She opened her mouth to speak.

“But,” he continued before she could get a word out, “I don’t regret one second of it.”
Labels: In Plain Sight

Hi Patti, thanks so much for putting up my book and blurb.