Confession time. I don't know if you noticed, but there's been no weekly reader on my blog for several weeks. Alas, that's because I haven't been reading. "Egads, Gladys, call an ambulance!" Ha! Not necessary. I'm not sick, no fever, no chaotic filled life - well, that's not true, but that has never impacted my reading. And it certainly isn't because I don't have stacks and stacks of wonderful choices. Can't really say what's up with the lack, I just haven't been in the mood to read. Shocked me, too. This doesn't happen very often, but occasionally I just don't want to. So there it is. So instead today, I want to talk about a few things that are in my to-be-read pile. 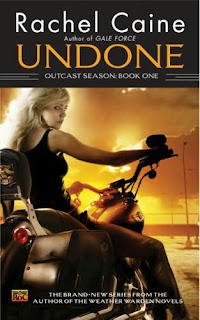 Once she was Cassiel, a Djinn of limitless power. Now, she has been reshaped in human flesh as punishment for defying her master - and living among the Weather Wardens, whose power she must tap into regularly or she will die. And as she copes with the emotions and frailties of her human condition, a malevolent entity threatens her new existence...

Ann Aguirre's Book Club will be reading Rachel's book. Visit her website for all the dets. I've got my copy. Do you?

Second, shouting out from my e-book file is this great entry by Donna Michaels. In the Andromeda Galaxy, XANDRA MONOCERROS, Princess of Lacerta, dreads the coming of the Fourth Moon. Every five years it appears, drawing death to someone dear. First her mother then her husband. Will this cycle take another loved one? Even worse, Lacerta is heading for the same implosion disaster as their ancestral planet Earth.

Seeking a solution, Xandra crosses paths with DARIUS VAN LAARS—the dangerous outlaw from her visions. Will their intense attraction dissuade Darius from carrying out personal revenge on the man key to saving Xandra’s planet? Can she save Lacerta or will she fall victim to the Legend of the Fourth Moon?

Here's the excerpt. This is what put this in my Had to Buy category.

Xandra sighed. “Don’t tell me you’re still mad?”
Silence.
“Come on. All I wanted was a ride to the planet where you were already heading. Jeez. Whoever it was that claimed women are moody obviously never met you.”

A string of curses assaulted her ears before Darius’ fist pounded a switch. Cold shackles clamped her wrists and ankles and held her immobile to the seat.

“What are you doing?” Heart slamming into her throat, she yanked the restraints and stifled a yelp as hard steel bit into her skin.

Grim-faced, her captor flicked the auto-pilot button, unstrapped himself then stood. Fear—sudden and sharp—stiffened her spine and hiccupped her pulse. Now what? Sense of survival kicking in, she inched her fingers toward the knives sheathed under her sleeves. Drat. The shackles prevented access. Should I use my magic? She chewed her lip and eyed the approaching stranger. Powerful, dangerous; her mind registered him as such while her body heated in response to his strong masculinity. Very dangerous. Forcing her fingers to relax, she drew in a steadying breath, and bless the heavens, logic returned. Magic would only render him unconscious and she’d still be stuck in this chair.

Deep and menacing, his voice echoed through the craft and tripped her heart—along with his next words.

Large hands curled around her wrists and restraints, sending a shockwave of shivers up her arms. Eyes, no longer frosty, blazed with desire and ravaged her face as he leaned in. She stopped breathing.

Holy cosmos! He was going to kiss her. And she wanted him to.

And finally, I'm in countdown. Five, four, three, two, one! 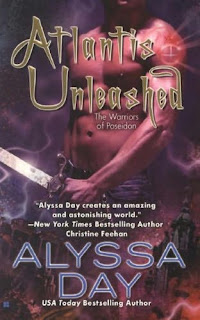 Poseidon's warriors swore eleven thousand years ago to save humanity from those who stalked the night. Now two souls - immortal and human - are all that stand between justice and the eternal darkness: a warrior prince and the beautiful and prescient archaeologist he's been sworn to protect.

Following that will be Book 4, Alantis Unmasked in July. That always necessitates going back to the beginning and reading them all again. Yes!

Same month, Branded By Fire, a new Nalini Singh psy-changeling book will be out! Nothing like a one-two punch from two of my favorite authors to break my mood.

So what have I been doing instead of reading? Umm.... I've seen Star Trek twice -- awesome movie, BTW, go see it. I'm going again on Thursday - #3. I've been cooking - trying my hand at old recipes that I learned to make with my mother and just hadn't done so in awhile -- those included: homemade applesauce, onion rings, bread - and next up is jelly and pickles. I've been moving furniture - don't ask. It's not very interesting. I've reacquainted myself with Dr. Mario on my DS (darn addictive Nintendo!). And I've been trying to get grandson to say 'mama' and 'up' - repeating those words at least 100 times a day. Geesh! Stubborn kid - everything is GO! Oh yeah, and I've been writing. I'll update that in another day or so.

So stay tuned. Alyssa Day is about to break me out of the reading doldrums! Thanks Alyssa!
Labels: weekly reader

Awww!! Your lovely post broke *me* out of some doldrums. And I'm getting ready to see Star Trek for the THIRD time!! Is that wrong? :)
hugs,
alyssa

Frankly, I'm going for the third time tonight, so uh. . no, that's not wrong. We're just enthusastic fans! And thanks for two back-to-back books!

Where have I been? I missed you posting one of my edits, LotFM: Mark of Goren. Wowness, that is a great book. The cover does not tell the story on this one. Think Vin Diesel in Riddick...great space epic and so far the only one I've seen at TWRP.