About time I caught up my weekly reader, huh? Because . . . a) ya'll know how much I read, and b) I've been sick, so you know I have a list. Before I get into that I wanted to comment about something.

A few days ago I was hanging out over at Smart Bitches, Trashy Books. I'm a lurker over there who occasionally comments. Mostly I just like to read about what's up and what's a good read. That particular day, Sarah had posted a review of With a Twist by Deidre Martin, a book she rated DNF (did not finish) and proceeded to review the parts she did finish, explaining why she put it down. A controversy blew in the comments because some thought for a review to be posted, she should be a responsible reviewer and read the whole book before making her comments. It brought to mind my own weekly reader, the books that I haven't finished, and my own commenting system. For the record, I just want to say that I don't review books. I'll post the back cover blurb. I'll grade them and tell you what I thought of them in about 50 words or less, but I don't tear them apart and write a full book report. There are scads of other sites that do that, and frankly I just don't have time. If you find a new gem because of a quick scan of my reading list, or avoid one I could not finish and save your money for something else stellar, all's well and that's what I intend. 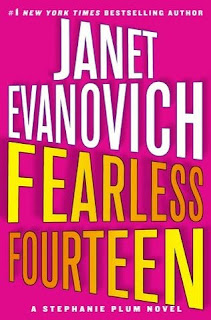 Personal vendettas, hidden treasure, and a monkey named Carl will send bounty hunter Stephanie Plum on her most explosive adventure yet.

That's from the front flap. I didn't post the hole blurb because . .. well, it's too long. I think I might have to take issue with the word explosive adventure in that description. This is definitely not a bad book, it's got some major laugh out loud moments, some awesomely weird new characters, and Ranger/Joe controversy still rages. The plot overtook this story somewhat, though, and it was a very busy book - so busy that Stephanie and Joe barely had time to have sex. Now that's not a major downer, but still that's the part I really enjoy - the byplay between Joe and Stephanie. Wait for the paperback or check it out from the library is my best advice - Grade: B. 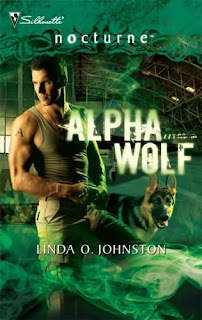 When Dr. Melanie Harding comes to rural Maryland to open a veterinarian clinic, she has no intention of buying into the area's absurd werewolf legends. Until she rescues an ordinary dog shot with a silver bullet, and meets his sexy owner, Major Drew Connell.

A founding member of the Alpha Force on a nearby military base, Drew has developed an elixir that helps werewolves control their shape-shifting abilities. Drew has always tried to keep his distance from the civilian population, but Melanie's sweet and gentle nature soon wears down his defenses. With the attacks on people and animals in the area mounting, can their fiery attraction withstand their toughest challenge?

Silhouette Nocturne #56 - My first experience with this line of books. I'm still grieving this one. Look at that picture. Read that description. I so badly wanted to love it, so badly wanted to put it on my shelf and anxiously await the next one. Not to be. Grade: D. Drew and Melanie are stick people, too one-dimensional for such a lovely plot idea. Their romance is fractured. By that I mean there isn't a logical progression from interest to kissing to sex to love. It jumps all over the map. Plot is the same way. The world building left the reader out in the dark, with not enough information about why Drew's work was so critical - not enough at stake, I guess, and too focused on the town's absolute hysteria over werewolves. I know there will be more in this series, but I'll be bypassing them, sadly, regretfully, tragically. Boo hoo.

Now, you know I've been sick. One of the things that really helps me when I'm feeling bad is to delve into my list of comfort books. You know the ones -- those ones you keep on your shelf that you read over and over and over because you love them and they always make you feel better and sigh at the end. These are a few of mine: 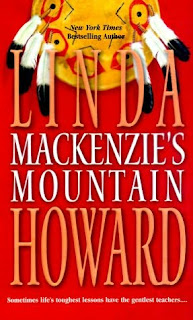 When spinster schoolteacher Mary Elizabeth Potter confronts Wolf Mackenzie in order to get Wolf's son back in school, she comes face to face with a bitter and dangerously attractive man still paying for a crime he did not commit.

If you haven't read Linda Howard's Mackenzie series, my question to you is why not? Strong alpha males, devoted to their female loves, and it doesn't take any of these men any time at all to figure out this woman was meant to be his for keeps. Lots of action, lots of sigh moments, fabulous, intimate sex. A+ Classic Keeper 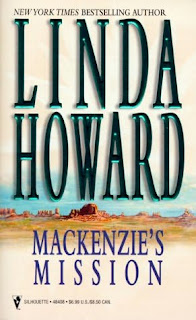 Night Wing-the revolutionary test plane with a top-secret weapons system-was Colonel Joe "Breed" Mackenzie's number-one priority. And weapons expert Caroline Evans was his number-one distraction. True, the stubborn blonde was giving him the cold shoulder, but Joe hadn't become the best of the best by giving up. Then he discovered someone on the inside was sabotaging Night Wing, and with her late hours and specialized expertise, Caroline seemed the obvious choice. Now Joe had to choose between allegiance to his country and love for his prime suspect...

My only complaint with Joe was that he could actually believe that Caroline would be a traitor to her country - she should have smacked him harder for it when they finally made up. Caroline is smart scientist and an ultra feminine woman. I loved her interaction with Joe. Another A+ Classic. 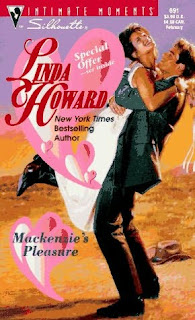 Barrie Lovejoy needed a savior. The terrorist group holding her hostage surely wouldn't tolerate her silence much longer..Then out of the darkness Navy SEAL Zane Mackenzie arrived and led Barrie from her captors straight into his sheltering arms.

Navy SEAL - natch it would be on my list. Do I need to say more? Best of the three! A+ Classic Keeper - pull and read parts just because you can!

And now I'm finished for the day. I know. You're gliding back up the page and thinking - you were sick for ten days and there's only five books on here. Actually, there's more on my list - BUT, I'm starting a new column on my blog tomorrow called Highly Recommended. Once in a while you watch a TV show or a movie, read a book, or buy a product that just amazes, enthralls, and causes the whole body to wiggle. Tomorrow, I'm going to bring you my first Highly Recommended column . . . featuring the rest of the list. Lips are sealed . . .until tomorrow.
Labels: weekly reader

I read that cover as Linda MacKenzie's Mountain Howard, which was weird.

And it's too bad about that alpha wolf guy. Holy mackerel.