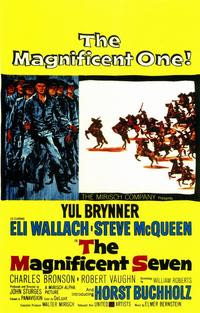 Monday I was having a bad day, so I decided to escape reality. A big fan of The Magnificent Seven television series (who wouldn't be with Michael Biehn, Eric Close, Ron Perlman, and Dale Midkiff), I decided to rent the original classic cowboy movie and sit back and enjoy. Yul Brynner was the only established movie actor at the time and had previously won an Oscar for The King and I when he was cast in the role of Chris Adams, gunslinger. Steve McQueen was starring in a successful television series, Wanted: Dead or Alive, for CBS. It's rumored that he purposely crashed his car and 'faked' an injury to get time off from the series to film. He plays Vin. McQueen had starred in a movie directed by John Sturgis a couple of years early. It had starred Frank Sinatra who was said to be so impressed with McQueen that he made sure he got alot of shots and dialogue sent his way. John Sturgis later made sure McQueen was cast in The Magnificent Seven and The Great Escape, his next two projects. John Sturgis also made big screen stars of Robert Vaughn, James Colburn, Charles Bronson, and Eli Wallach from this movie. The remaining two men were Brad Dexter and Horst Buchholz.

The plot of The Magnificent Seven is 'tried and true' simplistic. A bandit terrorizes a small Mexican farming village each year. Several of the village elders send three of the farmers into the United States to search for gunmen to defend them. They end up with 7, each of whom comes for a different reason. They must prepare the town to repulse an army of over 100 bandits who will arrive wanting food. When the leader of the bandits come, they fight him and his men off. The second time he comes one of the villagers gives up the seven, thinking it will solve the problem. The leader of the bandits takes their guns and throw the seven out of town. He gives them horses and gives their guns back to them when they are far out of town. The seven decide that they aren't going to run, and head back to the village for a final showdown. 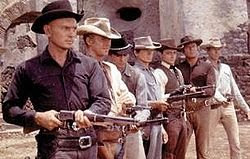 The true genius of this movie is not in its plot. It's in the damn enticing, edgy dialogue. I realized this when McQueen utters to the bandit: "We deal in lead, friend." Short. Sweet. Pointed.

McQueen in fact, I thought, had the best dialogue of the bunch. Its noted that McQueen effectively hijacked the lead from the bigger star (Yul Brynner) by ensuring he was nearly always doing something in every shot he and Brynner were in together, such as adjusting his hat or gun belt. (Yul Brynner got married on the set so maybe he was too distracted to notice!) Here is another great scene with some truly fabulous dialogue - again a scene stolen by McQueen: The seven are sitting around and Chico - the young, wannabe gunfighter says:

Chico (Buchholz): Villages like this they make up a song about every big thing that happens. Sing them for years.

Chris Adams (Brynner): You think it's worth it?

Chris Adams: It's only a matter of knowing how to shoot a gun. Nothing big about that.

Vin (McQueen): Yeah, sure. Everything. After awhile you can call bartenders and faro dealers by their first name - maybe two hundred of 'em! Rented rooms you live in - five hundred! Meals you eat in hash houses - a thousand! Home - none! Wife - none! Kids... none! Prospects - zero. Suppose I left anything out?

Chris Adams (Brynner): Yeah. Places you're tied down to - none. People with a hold on you - none. Men you step aside for - none.

Chico: Well. This is the kind of arithmetic I like.

Chris Adams: Yeah. So did I at your age. 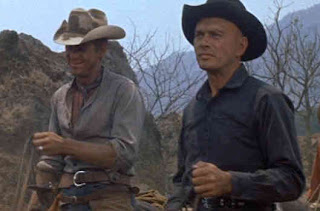 When the villagers throw a celebration for the seven, glad they are there to defend them, the seven note there are no women, only little children. McQueen gets another laugh out of me with this sarcastic line:

My favorite thing about this movie was that the simple plot showcased seven heros who were larger than life, but who also displayed human flaws and inner darkness. They were men who were intimately familiar with the path they had chosen and comfortable with themselves, even if somewhat tormented. What it boiled down to at the end of the day, though, could be summed up in one small bit of dialogue.

Chris: You forget one thing. We took a contract.
Vin: It's sure not the kind any court would enforce.
Chris: That's just the kind you've got to keep.

The film's score along with the main theme is by Elmer Bernstein. The score was nominated for an Academy Award in 1961. From 1963 the theme was used in commercials in the USA for Marlboro cigarettes. The score was listed at #8 on AFI's 100 Years of Film Scores.

If you've got a few minutes, click on this video from youtube.com and watch the three minute clip. It just might entice you to rent the movie. . . if you love a great cowboy flick!

Patti's Grade: A + Oh and yesterday's unidentified cowboy was none other than Steve McQueen.
Labels: movie review, the magnificent seven

Your blog keeps getting better and better! Your older articles are not as good as newer ones you have a lot more creativity and originality now keep it up!

Hi There I'd like to thank you for such a terrific made forum!
Was thinking this is a perfect way to introduce myself!

Sincerely,
Monte Phil
if you're ever bored check out my site!
[url=http://www.partyopedia.com/articles/pirate-party-supplies.html]pirate Party Supplies[/url].