Today is the first day of my new Highly Recommended column. I’ve been contemplating this column for quite some time because it seemed like a nice addition to my blog. Once in a while, there is a movie, product, book, television show, or activity that tantalizes the senses, enriches the mind, and comforts the soul. And I think when that’s the case, that particular item deserves to have focused recognition and shouldn’t be lost amid a crowd of other things. Hence, monthly I’ll be posting to let you know I’ve found something that reaches that level of intense satisfaction.

This month, I’m pleased and happy to announce that my highly recommend item is Robyn Carr’s Virgin River series.

The first book of this delightful series is Virgin River and was published in 2007. Shelter Mountain and Whispering Rock quickly followed that same year. A Virgin River Christmas was released in 2008. Second Chance Pass, Temptation Ridge, and Paradise Valley were just released this year. Aside from the fact that I love a book (or series) that develops a world or a community as if it was a living breathing character – and these are right up my alley because this is what I write – Robyn has brought these books to roaring life with characters that laugh, cry, love, hate, mourn, joke, work, and have trials and failings just like you and me. She’s done that so subtly that you aren’t aware these are words you are reading as you devour more and more of the lush images, taking them to heart and believing in the life that she has breathed into the characters and the setting. She skillfully balances the lives of multiple characters, keeping their obstacles and triumphs firmly planted in your mind, while maintaining an interesting and varied pace with as many twists and turns as the road into Virgin River. These surpass a letter score and are highly recommended because I believe you should visit your local bookstore and buy all seven of these. Read and enjoy them, and put them on your shelf to read and enjoy again and again. That’s what highly recommended is all about. 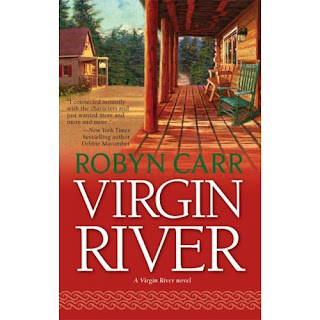 When the recently widowed Melinda Monroe sees this ad she quickly decides that the remote mountain town of Virgin River might be the perfect place to escape her heartache, and to reenergize the nursing career she loves. But her high hopes are dashed within an hour of arriving: the cabin is a dump, the roads are treacherous and the local doctor wants nothing to do with her. Realizing she's made a huge mistake, Mel decides to leave town the following morning.

But a tiny baby, abandoned on a front porch, changes her plans...and a former marine cements them into place.

Melinda Monroe may have come to Virgin River looking for escape, but instead she finds her home.

I must admit I had a little trouble getting into this book. It wasn’t until Melinda discovered the baby on the porch (about page 43) that I bought the premise hook, line, sinker, and pole. I’m not sure what caused my initial reluctance – whether it was being sick or what was presented about Melinda I didn’t quite like, or whether Mrs. McCrea was off the mark. If it strikes you that way, keep reading. You won’t be sorry. The plot with the baby takes an unexpected turn and it isn’t anything you’ve read any place else. Jack saved the day. Over forty, a retired marine now bar/restaurant owner, he takes one look at Melinda and his bachelor days are over. Problem is, Melinda is still seriously grieving the violent death of her husband and could care less that Jack is the hottest thing since oven-baked bread. In her journey to put aside her grief, Melinda delivers more than one heart-felt blow to Jack’s feelings, but he’s tough and stays in the fight and finds his happily-ever-after. Along the way we meet Preacher, Doc, Rick, and a few of Jack’s best Marine buddies, along with a few other people in the back woods of northern California. 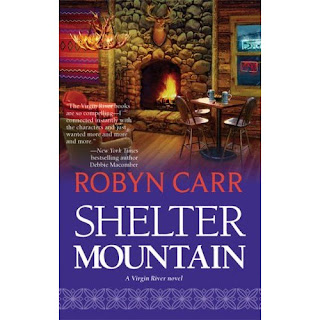 John "Preacher" Middleton is about to close the bar when a young woman and her three-year-old son come in out of the wet October night. A marine who has seen his share of pain, Preacher knows a crisis when he sees one-the woman is covered in bruises. He wants to protect them, and he wants to punish whoever did this to her, but he knows immediately that this inclination to protect is something much more. Paige Lassiter has stirred up emotions in this gentle giant of a man-emotions that he has never allowed himself to feel.

But when Paige's ex-husband turns up in Virgin River, Preacher knows his own future hangs in the balance. And if there's one thing the marines' motto of Semper Fidelis-always faithful-has taught him, it's that some things are worth fighting for.

I think of this book as the education of Preacher. He is an intriguing mix of toughness and naiveté with a rock solid moral character, a mouth that sprouts unvarnished honesty and hands that are magic in the kitchen. His gentle handling of Paige and her son made me melt. Again, Robyn takes another route around the traditional abused wife plot, and that alone made me keep reading to see how she’d resolve each dilemma she placed in front of Paige and Preacher. Jack and Melinda are back, as are Doc, Rick, and some of Jack’s family. We learn a little more about Virgin River and it’s starting to feel like home. 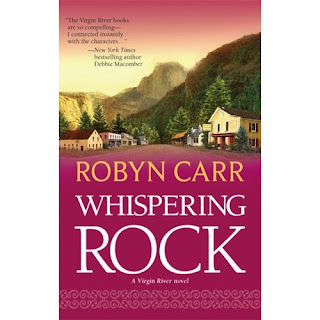 A decorated U.S. Marine reservist, LAPD officer Mike Valenzuela was badly wounded in the line of duty, but has found hope and healing in Virgin River. When he agrees to become the town's first cop, he does so knowing it's time he settled down. Twice divorced and the lover of too many women, he secretly longs for the kind of commitment and happiness his marine buddies have found--a woman who can tie up his heart forever. He finds that woman in Brie Sheridan, a Sacramento prosecutor who understands his drive to protect and serve. Virgin River becomes a safe haven for Brie after nearly losing her life at the hands of a crazed criminal. Though tough and courageous, she's got some fears she can't escape--but now she has someone who will show her just what it means to trust again.

Mike will do anything to help Brie free herself from painful memories. Passionate, strong and gentle, he vows to give back to her what she's so selflessly given him--her heart, and with it, a new beginning.

One of the things that publishers do that I think is pretty slick is to print the first scene of the next book in the previous book. That’s how I got hooked with this series. Initially, I had bought only Virgin River. Then I read the first scene of Shelter Mountain at the end of Virgin River and at 3 am was wishing Borders was open so I could dash over there and buy the next one. I made the trek the next day. At the end of Shelter Mountain, I again compulsively peeked ahead (because yes it was really stupid to read until 3 am again, knowing I didn’t have the next book on hand, but I couldn’t stop myself.) Only this time, I was horrified to discover that Jack’s sister is assaulted and Mike, his long time Marine buddy and LA police officer, has been seriously wounded. I wasn’t sure I wanted to pick up this book. But what kind of author doesn’t challenge her characters with trials that mirror real life – even when it hurts to think of them devastated, wounded, and struggling?

(Please note that THIS time I went to Borders and bought the rest of the series so I wouldn’t be wide awake at 3 am and saying “Dammit, I wish I had the next book.”)

Mike and Brie’s journeys – separately and together – was so touching, the pages practically turned themselves as I struggled with them to recover and learn to love and lean on each other. Jack and Melinda have a baby, Preacher provides comic relief that will move you to tears, Rick grows into a caring young man in an age-old, wrenching dilemma, Doc has a medical crisis – you’ll find that and more in these three books. 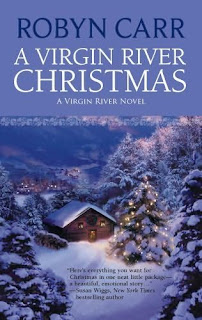 Last Christmas Marcie Sullivan said a final goodbye to her husband, Bobby. This Christmas she's come to Virgin River to find the man who saved his life and gave her three more years to love him.

Fellow marine Ian Buchanan dragged Bobby's shattered body onto a medical transport in Fallujah four years ago, then disappeared as soon as their unit arrived stateside. Since then, Marcie's letters to Ian have gone unanswered.

Marcie tracks Ian to the tiny mountain town of Virgin River and finds a man as wounded emotionally as Bobby was physically. But she is not easily scared off. As Marcie pushes her way into his rugged and reclusive life, she discovers a sweet but damaged soul beneath a rough exterior.

Ian doesn't know what to make of the determined young widow who forces him to look into the painful past and, what's worse, the uncertain future. But it is, after all, a season of miracles and maybe, just maybe, it's time to banish the ghosts and open his heart.

All these books are my favorite, but this one simply touched my heart. Marcie would not give up on Ian. Because Ian never gave up on Bobby. And it’s Marcie’s tenacity that forces Ian out of his shell and back into the land of the living. I have to admit to wanting to slap Marcie’s sister a time or two, but that only added to the richness of the story. The rest of the Virgin River residents make an appearance with some funny, poignant Christmas scenes that had me marking this book to pull down and read next Christmas to get me in the mood for the holidays. 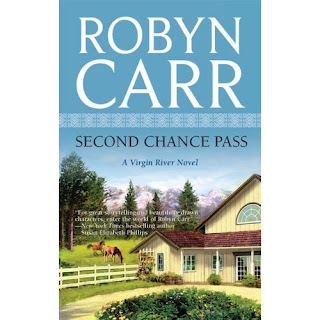 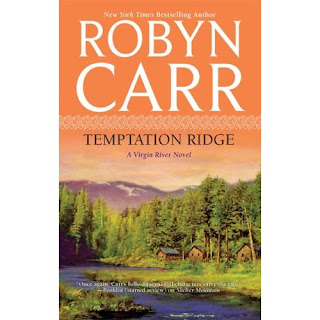 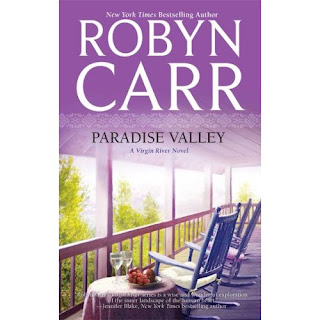 What about the other three you ask? Well, I haven’t read them. Yet. Seriously people, I’m in the middle of writing on three different projects. These books have a tendency to stay stuck in my hand – all day, all night – until they are finished. Word counts don’t get achieved when you say – ‘Oh, I HAVE TO read this, I’ll write tomorrow.” I have no doubts that the next three are going to be just as compelling as the rest of this series. There’s also a connected series called the Grace Valley Trilogy: Deep in the Valley, Just Over the Mountain, and Down by the River. I have no qualms about telling you to trek to your favorite book outlet and put all these in your to be read pile. Virgin River is waiting for you to join their family. I’ll see you there!
Labels: highly recommended