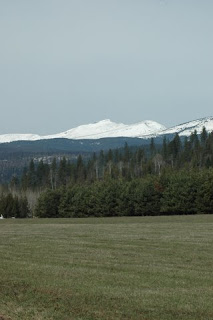 Yes, my trip to Idaho went well except for the nasty cold bug that attacked Anne on the way up, then passed to me, and now it's attacked John. Nothing as serious as swine flu, just an annoying, coughing, hacking, runny nose so-you-can't-rest cold. Yes, it bypassed Zach. (fingers crossed) So, this update is a little delayed and for that I apologize.

My brother took this picture of the mountains in my hometown of Bonners Ferry, Idaho. My dad used to call this area God's country and with a view like that who could disagree. For those of you who don't know, Bonners Ferry is in the northern panhandle of Idaho, near the Canadian border. It is the county seat of Boundary County and has about 10,000 residents. I was born and raised there, graduated from Bonners Ferry High School in 1975. My grandparents moved to Boundary County in the early 1920s, so county history is littered with Fredericksens and Lannigans. But I'm getting ahead of myself here.

First, I would like to ask someone - anyone - to remind me next time I book a 630 am flight out of DFW - how absolutely horrid it is to be up at 330 am. When I lived in Tuscaloosa, Alabama and ran a paper route, that hour of the morning was acceptable. Now, it is not. I have a serious objection to being up before the sun is and even coffee doesn't help. At any rate, Anne, Jamie, Zach, and I left our house at 415 am and made our way to DFW, parked in Remote South and took the shuttle to Terminal E and Frontier. It's raining and I'm praying we're going to get off the ground before the predicted thunderstorms roll in. Zach has a WTF! look on his face when we pull him out of bed which was seriously funny, but the fun he had riding the bus to the terminal was priceless. Check-in runs smooth, through security in a heartbeat, even get Zach some milk for his cup laced with 1/2 tsp benadryl before we board. Take off is bumpy and much turbulence from the storm, but soon we're above it. Zach falls asleep. One hour and twenty five minutes later we make a turbulent landing in Denver - where it is 33 degrees and raining slush.

We quickly visit a shop for more milk for Zach laced with another small dose of benadryl and board our flight to Spokane. We pull away from the gate and sit, not taking off - presumably for de-icing, but I didn't ask and they didn't say. Snowing now. We take off amid much bouncing and turbulence. Zach falls asleep. Jamie worked the night before and did not go to bed, cannot get comfortable in the seats, and has what we later find out is a severe respiratory infection and begins to throw up - mostly mucus and liquid, but still yucky. Forty-five minutes into the flight, our comedic pilot announces that he has an indicator light on and we have to turn around and go back to Denver and change planes. Not a joke. Forty-five minutes back and no drinks or snacks get served. We're bouncing all over the sky and munching on the froot loops in Zach's bag. We land in Denver, have time for a bathroom pit stop and nothing else before boarding a new plane. Plane takes off after another round of de-icing. Still snowing. Jamie is also still throwing up. Anne is suddenly coughing, sneezing, blowing runny nose, feeling like her head will explode from a sinus headache. Peachy. Zach falls asleep again.

We land in Spokane two hours late, get our rental car, and are ready to collapse, but we still have a two hour drive to Bonners Ferry. Pit stop at Perkins for food and a grocery store for caffeine and we're on our way. Raining lightly in Spokane. Planned rendezvous with brother to go to cemetery and visit my Dad's grave is put aside until the next morning.

On the edge of Bonners Ferry, I announce to the girls that we are going to drive by my folks old house - it's a tradition when you come home to go to their house, so we'll keep that up by doing the drive-by first thing. For those who don't know, my dad died in February 2005, by Fall 2006 my mom was forced to sell and move to Seattle so she could be taken care of by my brother. My sister is the only Fredericksen still living in Boundary County. It was tough to let this house go - my parents had built it and owned it for 65 years. I had high hopes and they were dashed the minute we pulled in the driveway. Yes, it was bought by someone, but no one is living in it and it's a rundown mess. Made me very sad as my parents took great pride in keeping it looking fabulous all the time.

On to the Kootenai River Inn - fabulous place BTW - checked in and met my brother and sister for dinner in the hotel dining room. Good talk, good dinner, make plans for the next morning breakfast, and we're off to the room where we all collapse in bed, exhausted. Zach immediately falls asleep, much to my surprise. Anne takes a mess of drugs and does the same, still blowing her nose. Jamie is still throwing up, which she did off and on through most of the night. I slept for two hours and am wide awake for the better part of the night, so I should know. In the middle of that awakeness - I must have dozed - it begins to lightning and thunder, rain pelting the window, and I hear the sound of freight train and panic. In the south, if you hear that sound, it means move your ass to somewhere safe - there's a tornado. It took me a minute to realize it was Bonners Ferry and that actually was . . . uh . . a freight train.

Saturday morning, Anne, Zach and I meet my brother for breakfast in the dining room. Food at this place is fabulous and the service is the best. My sister joined us half-way through. When we were finished, we grabbed Jamie and journeyed to the cemetery to visit my dad's grave. I followed my sister up the twisting road and around the dirt paths to the family section and parked. Next thing I know, I look up and she's backing up to get in a better parking position and plows into the bumper of my rental car. Gak! Just what I need - accident issues. Anyone out there who now utters - not another accident, Patti, geez! Well, you're just not on my happy list, okay?

We run into a bunch of relatives at the cemetery, as they are there to actually do a private family burial of my uncle. We exchange greetings and hugs, pay respects to my Dad, talk about my grandparents and uncles who are buried there too - all the usual - and then go back to the hotel, check out and head to the church for the memorial service for my uncle, Lee Robinson. I want to stop here and say that Uncle Lee was my favorite uncle. He was friendly, outgoing, down to earth, and could always find a story to tell. When we were growing up, he was a big part of our lives. I'm going to miss him greatly. His service was touching and funny and I was so glad we'd made the effort to go. 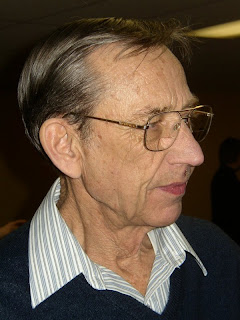 Luncheon at the church afterwards was filled with lots of cousins and family. Chatting was fun. Pictures were taken. It was over too soon. Gotta stop getting together when someone has died and plan a damn family reunion! 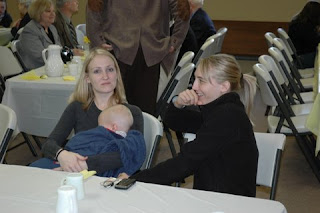 (Anne and Jamie with a sleeping Zach at the luncheon.) 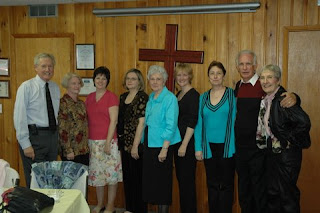 (My aunt Donna in the center next to me, and all the rest of the cousins - a traditional family picture at these gatherings.)

I had a very special experience here. My aunt Donna (who is my Mom's sister - Lee was her husband), came and got me and introduced me to Carolyn, her friend since 4th grade. Carolyn is a huge fan of my books and wanted to meet me in the worst way. This gave me a huge thrill because most of my fans contact me online and I never get actually meet them face-to-face. Talking with Carolyn and realizing how much my books have meant to her just tickled me down to my toes.

Finally, we announce we have to leave. We intend to drive back to Spokane and spend the night in a hotel near the airport, but first we're going to visit our other old stomping grounds, Cheney, Washington. After I left Bonners Ferry, I attended Eastern Washington University in Cheney, got a job there after I graduated, met Don, married, had three kids, and we had a cute little house about four blocks from campus which we sold when we moved to Tuscaloosa. I mentioned that I wanted to go by and see it and my cousin, Leslie, yelled at me: "Didn't you learn anything from your Mom and Dad's house?!!" LOL! Yes, Leslie I did. We went anyway. 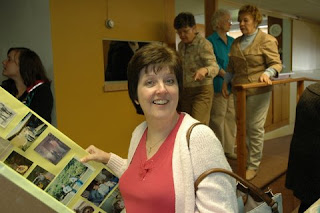 (My cousin, Leslie - partners in all things secret and anything that could get my other cousins in trouble.)

And we were pleasantly surprised. Our Cheney house is being lovingly taken care of, improved even, and Cheney looks fabulous, lots of growth there, and if winters weren't such a wretch up there, I'd even contemplate moving back there. Quick fast food dinner and we check into the Peppertree by the Airport, visit the gas station for snacks, and hole up in the hotel room. Jamie and Anne are both still not feeling great. Zach has been fabulous for the funeral and the dinner and the trip back. He falls into an exhausted sleep. The girls and I have pillow talk time and watch movies on cable. We're up at 4 am - geesh! - again! (Remind me to take the red eye home next time!)

I have a damage report to fill out at the airport for the rental car, then we're through security and boarded. More laced milk and Zach falls asleep at take off, sleeps all the way into Denver. We have a three hour lay-over, so find a place to eat breakfast, then a secluded corner so Zach can run around and burn some steam. After boarding the flight to Dallas, Zach falls asleep again at take-off and no, I didn't give him more benadryl. He sleeps all the way into Dallas. Can you ask for a better plane trip with a little kid? Trip in reverse, luggage, shuttle, parking, paid, and home - where we collapse exhausted and our dogs excitedly lick our faces. (Thanks Dan for babysitting!).

And since I promised, I culled through the pictures my brother took and found the best picture of my new haircut - this is my brother Gary, me, and my sister Karen. 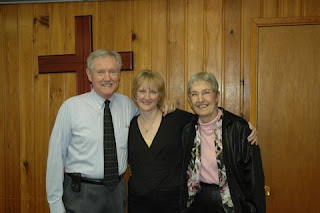 I want to thank Frontier and Denver Airport for the seriously HOT guys you have working for you. Seriously HOT. Thus ends my travel journal.
Labels: travel to Idaho

Boy I'm slow. I finally got over hear to catch up on your blog. Loved the trip description and wow--Zach slept through all the travel how wonderful! KT did me that favor when Mom and I drove to San Fran when she was 3 yrs old. One less worry LOL