Update on All Things Patti

I know. I've been AWOL for about two weeks. Wedding details finally closed in on us and literally we spent every day between my last post and December 21st running errands and finalizing things. I swear we were rolling out of bed, landing in the car, and running from place to place to finish everything. I personally was up until one a.m. the night before the wedding tying little ribbons on the bubble bottles. The final result was beautiful and worth every aggravating second. First, a BIG thank you to Christopher and Tiffany - who stepped in when we were unable to have our wedding rehearsal dinner in the location we'd booked. Thanks for your great house and the wonderful meal Christopher cooked. And thanks to Tiffany for being the emcee for the wedding reception and doing a fabulous job!

This post is mostly a pictoral. I couldn't resist. We got so many really good photos, it was hard not to.

The first set are my son, John, and his beautiful bride, Rebecca.

Much to Becca's consternation, I bought little bells and put one on each table and had our emcee announce that they should be rung any time they wanted to see Becca and John kiss. Becca's family enthusiastically endorsed that idea. This is her grandfather, leaning into the picture to ring the bell, so John and Becca kissed.

The second set are the groom and his mother - that would be me! Also included are the bridal party pictures and one more of the bride and groom.

And I'll bore you further with family pictures. Only four of these, bear with me. Pictures of Zach in a tux are coming. 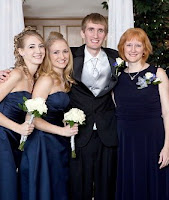 And now Zach. He looked so cute in his little tux!

Fun stuff from the reception from the Cha Cha Slide, to one of the groomsmen wearing the brides veil and dancing with the maid of honor, and the Bridesmaids fighting over the bouquet.

Finally, here's a picture of the little bottles I mentioned - yes, I tied bows on 125of those suckers - but look at the romantic moment made from that one little touch.

John and Becca's last dance - The Gift - Collin Raye, Susan Ashton, and Jim Brickman. We surrounded them while they danced and blew bubbles their way. At one point, they were surrounded by the love of family and friends with the air filled with bubbles. It was enough to make a mother cry . . . sniff, sniff. Definitely that moment is going to end up in one of my future romance novels.

Exhausted on Monday with no Christmas shopping done or baking started, the next few days were a frenzy of activity also to get prepared for Christmas. Now I have an ugly cold and am pampering myself and spending time pondering goals for 2009. Yes, I have a Weekly Reader that's huge because I didn't stop reading, but I'll get to that in the next day or two. Personally, I've had a trying year, but the highlights - San Francisco with my critique group and John and Becca's wedding will always be remembered first! Happy New Year, everyone!
Labels: wedding

Everyone looks amazing! I love the bridesmaid dresses. Gorgeous color. I'm glad all your hard work and stress paid off with a great day and fantastic memories. Big hug! Now go get some rest!

Lovely party, Mom! Bride and groom looked radiant, and I second Carrie in liking the bridesmaid's dresses. Bubbles were a nice touch! John sure looks like you--same smile. All the big planning paid off with great memories--even those that didn't go to plan.