He Gets My Vote 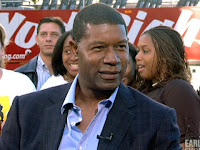 The former 24 star DENNIS HAYSBERT has been voted Favorite On-Screen President for his portrayal of PRESIDENT DAVID PALMER in the hit action series. The TV star beat off stiff competition from Geena Davis as President MacKenzie Allen in Commander in Chief and Martin Sheen's West Wing character, President Josiah Bartlett, to take the title with 17 per cent - just one percent more than Davis and Sheen, who came joint second in the Blockbuster poll. Harrison Ford took 12 per cent for his role as President James Marshall in 1997's Air Force One, landing him in joint fourth place with Bill Pullman's President Thomas J. Whitmore from 1996's Independence Day.

All favorites of mine - but they left one out. Michael Douglas, President Andrew Shepherd, The American President, 1995. Great speech at the end of that one. But David Palmer got my vote too!

Here's a few other fun facts for election day compliments of Yahoo News.

Why do we vote on a Tuesday... in November?

The short answer: We used to be a nation of farmers.

The long answer: Congress chose November because the harvest was over and the weather wouldn't be bad enough to prevent people from traveling.

As for Tuesday, people used to have to travel overnight to their polling location. (In 1845, horse was the preferred method of transport.) In an effort to avoid religious days of rest, Congress chose Tuesday, leaving Monday and Wednesday as travel days. Tuesday was voting (and horse-resting) day.


This is the first election since 1980 that a Bush or a Clinton hasn't been on the ticket.


This will be the first time in 40 years that Yale will not have one of its former students on the ballot as president or vice president. Not since Richard Nixon and Spiro Agnew battled Hubert H. Humphrey and Edmund Muskie in 1968 has Yale been shut out.