It's time to reveal my very favorite of all time Western hero from my youthful television watching days. Here's a picture for a clue: 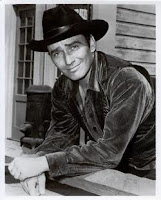 They made 249 episodes of this show, all of them in color and in a ninety minute format. This ambitiously cast and richly plotted series was based on the classic Owen Wister novel. Set in 1890s Wyoming, it centered on a mysterious ranch foreman (no one knew his name) and a host of other cowboys and townsfolk. Only stars James Drury and Doug McClure were with the show for its nine seasons. During the final one, the title was changed to `The Men from Shiloh.' The Shiloh ranch had several owners starting with Judge Henry Garth and ending with the Grangers.

You can view the opening theme on you tube. (Sorry, no embedding available.)

James Drury was inducted into the Cowboy Hall of Fame in 1991 for his role as The Virginian.

James Drury recently (July 2008)visited Galway, Ireland. The Virginian is still hugely popular there, running five days a week. You can catch part of his interview with the local news there. The man still has a lot of class!

My favorite thing about The Virginian - he was dependable, steady, honorable, and true - traits I loved about my Dad, too.

Now you know why he's my favorite!

And don't forget to enter my "A Picture is Worth a 100 Words" Contest! See the previous blog entry!
Labels: cowboy - part I