Television premiere week. Should have known that reading would take a small hit as I sort through what I really want to waste my time on, television-wise, that is. Because of that, only one book this week and it wasn't even a romance! 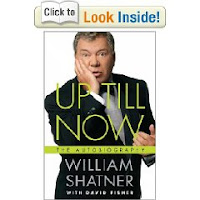 From the front flap: After almost sixty years as an actor, William Shatner has become one of the most beloved entertainers in the world. And it seems as if Shatner is everywhere. Winning an Emmy for his role on Boston Legal. Doing commercials for Priceline.com. In the movie theaters. Singing with Ben Folds. He’s sitting next to Jay Leno and Jimmy Kimmel, and he’s practically a regular on Howard Stern’s show. He was recently honored with election to the Academy of Television Arts & Sciences Hall of Fame. He was a target on a Comedy Central’s Celebrity Roast entitled “The Shat Hits the Fan.” In Up Till Now, Shatner sits down with readers and offers the remarkable, full story of his life and explains how he got to be, well, everywhere.

It was the original Star Trek series, and later its films, that made Shatner instantly recognizable, called by name---or at least by Captain Kirk’s name---across the globe. But Shatner neither began nor has ended his career with that role. From the very start, he took his skills as an actor and put them to use wherever he could. He straddled the classic world of the theater and the new world of television, whether stepping in for Christopher Plummer in Shakespeare’s Henry V or staring at “something on the wing” in a classic episode of The Twilight Zone. And since then, he’s gone on to star in numerous successful shows, such as T.J. Hooker, Rescue 911, and most recently Boston Legal.

William Shatner has always been willing to take risks for his art. What other actor would star in history’s first---and probably only---all-Esperanto-language film? Who else would share the screen with thousands of tarantulas, release an album called Has Been, or film a racially incendiary film in the Deep South during the height of the civil rights era? And who else would willingly paramotor into a field of waiting fans armed with paintball guns, all waiting for a chance to stun Captain…er, Shatner?

In this touching and very funny autobiography, William Shatner reveals the man behind these unforgettable moments, and how he’s become the worldwide star and experienced actor he is today.

William Shatner is #2 on my favorite male actor list. (Richard Dean Anderson is #1, in case you were wondering.) So it was natural when I saw this at the library that I would grab it. Yes, I am old enough to remember the original run of Star Trek on television. I also remember arguing and bargaining with my Mom for permission to watch it - she hated it. My dad usually tipped the scale in my favor. It was with pleasure, then, that I read his book. I enjoy his sense of humor and the way he's accepting of who he is - talents and faults. As a writer, I appreciated his take on acting and could make the leap to my own work. This reads fast and is an enjoyable way to spend a few hours. Patti's grade: B+

Favorite quote: "The more directors and producers who see your work, the more chance there is they will offer you work."

I am reading Twilight by Stephanie Meyers now. Just got started so expect a review next week, plus pulled three Super Romances to help me figure out where to submit one of my manuscripts. I'm hoping to read them, too.

I like Shatner, too. Find him hysterically funny and humble.

Check your math on your SciFi piece--you have 3% done, not .03% Give yourself some credit!