This just in from Yahoo News:

GENEVA - Scientists have successfully fired protons in both directions around a 17-mile (27-kilometer) underground ring in what some call the next great step to understanding the universe. The counterclockwise circuit inside the world's largest particle collider follows a test that sent a beam in the opposite direction Wednesday. Scientists hope their experiments inside the 4 billion Swiss franc (US$3.8 billion) Large Hadron Collider will provide the power needed to smash the components of atoms together in attempts to learn about their structure. The startup was eagerly awaited by physicists around the world who will conduct experiments at the collider.

Here's another little known fact about me - I love physics! Suck at it. Most of the time don't understand it. But I'm fascinated by it. Possibly my interest was influenced growing up by Star Trek and Mr. Spock and Scotty. Several years ago, I added a great physics book to my library - one that is basically for the non-physics minded. It is laid out in a series of two page articles explaining the progression of our understanding of physics from the beginning. Published in 1995, it is highly technical, but is filled with illustrations that make the subject easier to grasp. If you, like me, find yourself 'attracted' to this subject, then this is a great book for you. Used copies for only 84 cents + SH on Amazon or probably available at your local library. Check it out!

The Search for Infinity: Solving the mysteries of the Universe by Gordon Fraser, Egil Lillestol and Inge Sellevag with an Introducation by Stephen Hawking 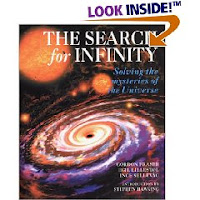 Amazon Link
Description: What is the universe made of and where did it come from? Fraser and others examine the great discoveries of science, examining the major mysteries and answers found to scientific questions. From the hunting of the quark to the search for a unified force to substantiate a theory, this is filled with insights.

Also, for a bit of fun on the physics subject - check out this rap on YouTube.

Dude. I am such a science nerd. I loved that. Helps that big brother is an astrophysicist at UCLA...