First, I apologize for waiting so long to post another Cowboy entry. I know how difficult it must have been to wait for it. LOL! For the record, I was in love with Flint McCullough - Robert Horton - from Wagon Train. Not only was he handsome, he was the best scout in the West, had a cowboy strut that snagged the eye, and was smart and dependable. What more could a girl want?

This post will be dedicated to show that didn't become my favorite until it hit reruns and was on every night. I never missed it. This show was rich with hero material. Take a look.

The Big Valley had star power. Barbara Stanwyck, Richard Long, Peter Breck, Lee Majors, and Linda Evans. Barbara Stanwyck was a well-known movie actress. The others would go on to become well-known in other shows. Tv.com described the show this way:

"The Big Valley is set in the 1870's in California's gorgeous San Joaquin Valley. The series tells the story of Stockton's richest and most powerful family, The Barkley's. Lead by the family matriarch and widow Victoria Barkley, they live on the Barkley Ranch managing their cattle herd, mines, citrus groves and logging camps. Victoria's four adult brood consists of her two sons Jarrod and Nick, daughter Audra and step-son Heath. Jarrod, a prominent lawyer, handles all of the families legal issues and manages his two law offices in Stockton and San Francisco. Nick, a strong built rancher, physically manages the family's holdings. Nick is aggressive, out-spoken and at times hot-headed. Victoria's youngest child is her beautiful daughter Audra. Audra is protected by all of the family members. Audra is very sensitive, caring, loves horses, and is a very talented rider.

Heath, Victoria's step-son, helps Nick manage the family's processions. Heath tends to be quiet, reserve and sincere but stands up for what he believes in and wears the Barkley name proudly. There was a fourth young son, Eugene, in the first season but he is gone without explanation after that.

The Barkley family members bond together like glue when troubles arise such as land disputes, squatters, bank robbers, horse thieves, kidnapping, injuries and illness. They share strong family values, joy, laughter, heartache and pain as they deal with life's problems."

The Big Valley was one of the few shows of the day that featured a strong woman running the family. This was Lee Majors first role after only six weeks in acting school. To get to play opposite an four time nominated Academy Award actress must have been a real thrill for him. This show appealed to my sense of adventure, my family values, and had more than enough hero offerings to fit my mood. Legal brain Jarrod, hot tempered Nick, or dependable Heath. Who do you think was my favorite? 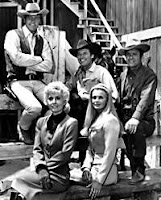 You would be right, Marianne! Dark, delectable, and dangerous - bad boy personified!