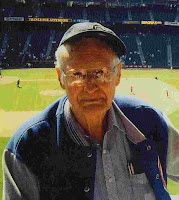 My father was known for his quotes. He always swore that he got most of them from his Uncle Ben. I didn't realize until I was older that he was referring to Ben Franklin. Today, I thought I'd share with you some of my father's frequent sayings.

2. "It is better to remain silent and be thought a fool than to speak up and remove all doubt."

7. "Oh what a tangled web we weave when first we practice to deceive."

9. "The world is not gonna end by natural disaster or nuclear war. It's gonna get smothered in stuff!"

11. "The road to hell is paved with good intentions."

13. "A handful or a mouthful is enough." (Once heard at the dinner table when I was in high school - Mom about killed him. My brother noted that perhaps THAT is the one that he always started, "There was an old sailor in the Navy who said...." And he NEVER got past that much before mom would pounce on him and stuff a dish cloth in his mouth.)

What a great tribute to your Dad! Your family sounds wonderful. Happy TT!

I can feel "What, heck! Pay attention!" becoming my catchphrase. My dad would tell dirty jokes too, and mom would stop him. Once he started this one about a caraval camel that needed sex every 50 miles. Mom stopped him. Later when we'd grown up and asked him about it, he couldn't remember. Lost forever.

My dad used a few of those too. What a nice tribute to your father!

OMG-- My grandfather used to say, "C'mon, Vera, let's go to bed so these nice people can leave."

How funny! Thanks for sharing, Patti.

Chris uses "huh, hell, pay attention" in our house constantly - I look at him every time and say "ok, Grandpa!" I wish I could have known your dad...but hearing about him so often, from you and Chris, I feel like I know him anyways. Great TT!